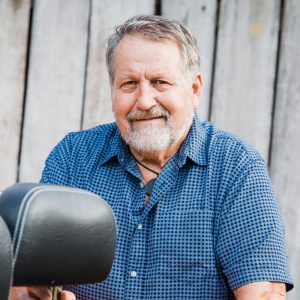 Col Clarke is a roll your sleeves up kind of bloke – in the best possible way.

He trained as a mechanic, owned an FJ Holden and raced cars, boats, gocarts, bikes and sidecars in his hay day.  He has built a dragracer (which was a little outside the box) that set many national records which stood for years. His love of trail bikes boats and cars is life-long.

When his son began speedway racing, naturally Col helped with repairs.  But modern race cars used fibreglass panelling, and there weren’t many specialists on the Sunshine Coast at that time.  Col went to the library and found a book about it. Well let’s just say, he worked it out.  Along the way, his expertise in fibreglass turned to manufacturing monster truck moulds and unique cartoon bodies.  Thirty years later Col’s Fibreglass Speedway Panel business has flourished and his services are in demand by a niche group of clients throughout Australia.

He water skied as a kid. Later competing in marathon ski racing and racing speed boats.  He owned an off-shore fishing boat, drove a 4×4 to Cape York and back again, and spent a serious amount of time on Fraser Island camping and fishing.

In the middle of all this, Col took a sharp left turn into the world of cosmetics. Yes, you read it right! Trading his King Gees for crisply pressed business suits, Col provided training for one of the world’s largest direct sales cosmetics companies.  While unexpected, this departure was a good fit due to Col’s natural and genuine interest in people, open and honest communication style and a knack for practical problem solving.  He attended national and international conventions and travelled extensively.

Later he developed a keen interest in sailing and took yearly trips to the Whitsundays where he chartered catamarans and cruised around the Great Barrier Reef with family and friends. These days his sailing interest is of the remote-controlled variety and in true Col style, his involvement was boots ‘n all, presiding over the Sunshine Coast Model Boat Club until 2018.

He also rode horses and founded an adventure tour business called Come a Long Trail Rides and later introduced competitive trail riding to Australian (a sport popular in the United States). He was on the State Management Committee for the Queensland Endurance Riders Association and was closely involved in organising and promoting many endurance rides.

Col likes to be involved, and over the years he’s sat on no less than nine community committees, often in leadership positions. He’s always ready to help.

In 2013 when his son-in-law acquired TOUROZ Trikes, it was as if all the stars of Col’s business and personal interests aligned. Trikes simply became his passion. When the opportunity to buy TOUROZ Trikes arose it was without hesitation, and Col knew he would, (pardon the pun)… never look back.

Put a TOUROZ Trike through it’s paces and experience the quality, style, performance and comfort for yourself.

Want to know more? Download our brochure now to find out which 3-wheeling freedom machine will suit you.

Horizon Trike Tours offers 3-wheeling adventures through the idyllic coastal villages of the Sunshine Coast. Tours from $140 for 1-2 people.
Go to Top